What Does Kombucha do for Your Health? 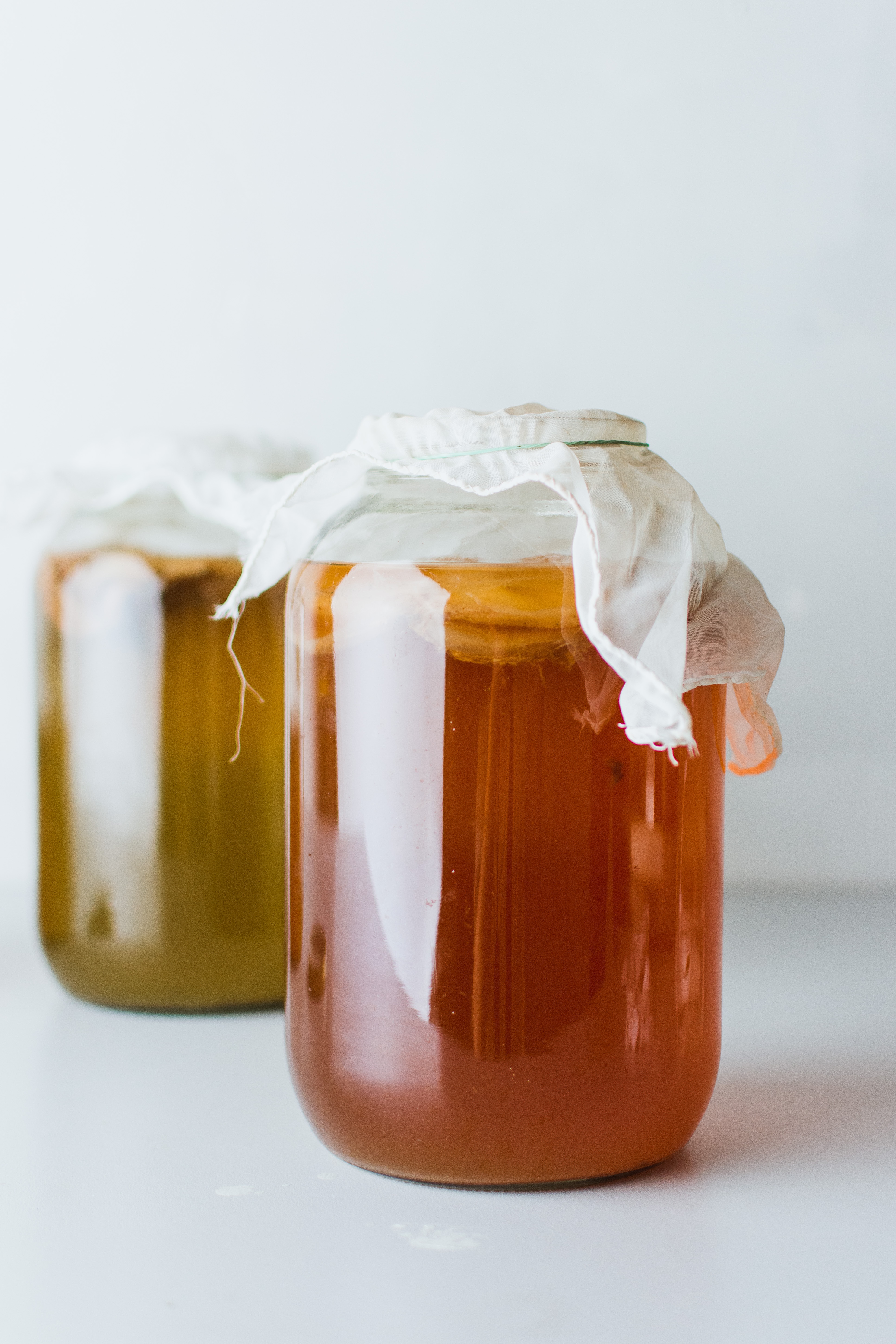 I get asked this a lot because I’m often sippin’ on booch. It’s fermented tea with probiotic benefits. It’s made with a SCOBY (Symbiotic Culture/Colony of Bacteria and Yeast) that proliferate by eating raw cane sugar. Not all SCOBY’s contain the same strains of bacteria. Generally you would see: Acetobacter, Saccharomyces, Brettanomyces, Lactobacillus, Zygosaccharomyces, Gluconacetobacter. It is genetically similar to apple cider vinegar with the main difference being that kombucha contains gluconic acid.

Caffeine content of Kombucha is reduced by 25% over the course of a 2 week fermentation period. Despite this, indulging in more than 12oz per day is not recommended, especially before bed because it is still a significant amount. It can be made with rooibos tea, which is caffeine free. Kombucha also naturally contains a very small percentage of alcohol. Commercially brewed should be less than 1% through pasteurization but home brew could be as high as 2.5%.

Green and black tea contain polyphenols which have antioxidant qualities that protect the body against oxidative stress which multiplies during the fermentation process. I feel like booch gets a lot of credit for things that it doesn’t actually do because of our limited knowledge of probiotics. There is evidence that it can help with diarrhea following antibiotic use as well as irritable bowel syndrome and other intestinal inflammatory disorders. What it cannot do is regenerate a culture that has been completely wiped out by antibiotic use. No probiotic supplement has been proven to repopulate a dead strain.

Most notably, as they pass through your digestive tract, the probiotics will have an immunomodulating effect on the existing bacteria whether it is natural or acquired immune response. There is not yet concrete evidence of it’s effect on other inflammatory responses such as arthritis, asthma or eczema.

Store bought Kombucha can present a risk to people with candida overgrowth due to added sugar content. The yeast culture contained in home brew is a beneficial yeast, not a pathogenic one like candida. A first time drinker may experience a flare up. This is usually temporary and possibly a detoxification effect which should begin to rebalance itself which is why it’s important to start slow.

If you are new to Kombucha and want to try for the first time, I like the GT’s brand and I would start with 1/4 of a bottle per day. I name drop GT’s because they were the first major kombucha brand and to this day are the industry leader. They have 2 different kombucha lines, the standard kombucha with organic flavouring and their Synergy line is the one made with actual fruit juices so that is the one I opt for.

As always, this is good in moderation and not for everyone.